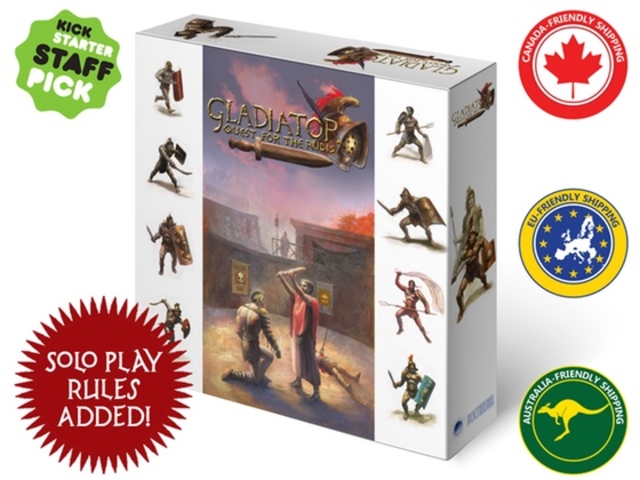 Greetings! I hope you've been enjoying Gladiator: Quest for the Rudis. We can continue to see the results of good word-of-mouth about the game and appreciate all the new players you're introducing to the game.

Jim has been busy answering questions and responding to comments posted on the Nocturnal Media forums. Please join the discussion:

Two results of these conversations we now share with you. Two files are in this Dropbox folder. There's an updated errata and rules clarification sheet and there's also a scoresheet you may use if you prefer to track information on paper rather than the game board:

As indicated in the errata, there are six cards that have been updated, including one Thraex Defend card that's been completely replaced. I'm including free copies of these cards with any GQR or expansion deck order and you may also send SASE to me to get free copies of the cards (instructions on the errata sheet).

The cards are also available on DTRPG as PDF and POD. The POD cards are the same ones I will send out, so they while they are nice, high-quality cards, they are not linen cards that will match the other cards in the game. The cards may not all be listed when you first look at this page, but they will become available in the next day or two. This option is available in the event you wish to just order the cards. The charge for the POD cards is "cost", which is the least I'm allowed to charge for POD on DTRPG.

I'd also like to remind you that there are several expansion decks available for the game. Our website can only be set for domestic US shipping, but if you're outside the US and would like any of these decks, then please contact me directly. Of course, additional copies of the main game itself are available too.

Also available soon on DTRPG will be the decks of the four gladiators types in GQR. Proofs of these decks are on the way to me now. So, if you'd like the convenience of a second, say, thraex deck, then you may purchase this deck on DTRPG. All the other decks (Famous Gladiators, etc.) will also be available on DTRPG, though if you want the linen card printings of these then you should order direct from the Nocturnal website.

Thanks again for supporting our game!

After much scrambling, I’ve finally made arrangements for all your copies of GQR. Here’s a quick status update:

USA: You should have your copies!

Canada: You may have your copies. I know one backer in Vancouver received his copy, so probably most all of you have yours now too.

Europe: Your copies have arrived in the UK and will be shipped by Kixto this coming week.

Australia & NZ: Your copies have been shipped to Aetherworks for fulfillment. This is the most recent development, so your copies are still on the way to Sydney. Aetherworks has promised quick turnaround.

If you’re enjoying Gladiator: Quest for the Rudis, please take a moment to become a “fan” of the game at boardgamegeek.com. Distributors are making final contact with retailers over the course of the next 1-2 weeks to place orders for the game. There are a lot of new board and card games available every month, and some retailers take note of a game’s support on BGG when deciding on their order.

Your support has already made GQR possible, and now a little extra boost may help it become successful enough to launch the host of expansions that we’ve planned, including gladiator decks for those extra gladiator counters you see in the game. (Jim has already completed the preliminary deck design for the offensive-minded, dual-wielding dimachaerus!)

Finally, if you also play roleplaying games, then please take a look at the current project for Storypath Cards. The project is in its final week and has hit five stretch goals!

Good news! It looks like Kixto will provide EU fulfillment. I'm making arrangements now to ship copies to the them from my Atlanta, GA distributor. I'll keep you posted regarding timelines.

Designer Jim Trunzo has compiled this list of important information.

1. Minor changes were made to the contents of the game between the printing of the rulebook and the production of the other components. For example, there are far more counters than indicated.

3. The Shield Foot Slam Attack/Defend card may be used either way, as stated. However, if used in defense: (1) a medium location changes to high; a low location becomes medium due to bending over to deliver the slam. If the Attack card is used for resolution, there is no modification to the attack.

4. While Stamina and its loss is addressed in multiple areas in the rule book, it is worth stating once again that regardless of which card is used to resolve an attack (Attack Card or Defend Card), the respective Stamina cost is subtracted from the gladiator attempting to employ the card. (Example: Gladiator selects and Attack Card that costs -3 Stamina; his opponent selects a Defend Card that costs -1 Stamina. Regardless of which card is determined by the Card Check, the attacker will lose -3 stamina and the defender will lose -1 stamina)

5. Kneeling or Prone, found on Page 10 is correct as stated but regarding the game counters, gladiator counters indicate ‘standing’ on one side and ‘kneeling’ on the other. EXCEPTION, 10 counters were misprinted and indicate "standing" on both sides. Just make a small notation on one side or the other to indicate "kneeling".

There are “prone” counters if you wish to use them, printed on the back side of Noxii counters. The Noxii counter was chosen at this time because, until an expansion employing them is released, they will not be used with frequency.

6. A clarification when attempting to Regain Feet via the Common Defend card found in the Universal deck: while the card is labeled “Defend” because that is the primary concern, it doesn’t preclude an attack if the gladiator attempting to regain his feet is in Control. Note that the conditions listed on the card indicate your options, dependent upon whether you are in Control or not in Control. What may not be clear is that the -1 Stamina is the cost for the Regain Feet card; and any other choice you make using an Attack or Defend carries its own Stamina cost.

7. If an Attack or Defend card "fails" and you resolve with the opposite card, it DOES NOT give you access to everything on the card. If the Defend fails, the attack chosen automatically hits but you only check for damage and armor mitigation; you cannot Critical or Fumble, nor can you choose options on the card. Likewise, if the Attack fails, the attack does no damage; however, you do not check the Defend card for Critical or Fumble, counter attack or automatic control or anything extra. The "bonus" features on the Attack card and Defend card only come into play when either an Attack or Defend succeed on their own right.

Roleplayers especially take note of my new project for Storypath Cards and Whimsy Cards. These cards encourage and empower players to add tot he narrative in any roleplaying game. The project has funded and met a first stretch goal to add new artwork. Please take a look!